An Interview with AJ Fitzwater

We’re celebrating the launch of Issue 19 by talking to our authors about what makes “Voyages” — and stories. 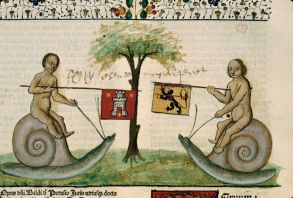 Lackington’s: You’ve said that “With God as Our Witness” was inspired by medieval tapestries that included strange images like knights riding snails. Can you tell us a bit about what caught your eye exactly, and how you transformed those inputs into this story for our Voyages issue? Were there other medieval sources you drew from as well once you started writing?

AJF: I’ve made a point of not writing medieval-style fantasy because I feel it’s been done, and there are so many other ways to explore secondary worlds. I want to challenge myself and my readers. I’m not a medieval historian of any type. But one day on Twitter someone did a funny breakdown of weird imagery in medieval tapestries—battle snails, knights with armoured penises, strange flying contraptions, symbols that mean God. The author of the thread pondered why these strange images don’t get much attention in fantasy literature. Immediately, they all snapped together in a story idea that I joked about writing, and Lackington’s editor Ranylt said, “Hey, our next theme is Voyages, I dare you to write it.”

There were no other medieval sources I used, but at the time I was writing it, Serena Williams was on her comeback from having her child and getting a lot of bullshit racist attention. I thought she was awesome as hell and deserved to be knighted for it. There might have been a touch of Brienne of Tarth in there too.

Lackington’s: Ser Sereena and her squire Wilma are two women in a questing party otherwise made up of men. This affects them in many ways: ordinary men’s armour doesn’t fit Sereena properly, they both often have to absorb slights and insults, and they are suspected at times of being witches. Given the difficulties that Sereena and Wilma face, what do you think accounts for their ultimate success on the quest?

AJF: Their success is due to the same tenacity many women and marginalized people have when faced with adversity—Bitches Get Stuff Done. The history of suffrage, civil rights, and activism is a wellspring of patient, angry, innovative, intelligent people making do with less, growing and working as a team. Unlike the male knights who treat their mounts as mindless war machines, Sereena sees her battle snail as a companion and being, treating it well, loving it. Therefore she knows its capabilities and nuances. She was denied the regular materials for her equipment upkeep, and her Make Do attitude means she discovered the airtight properties of the snail’s mucus instead of dismissing it as disgusting waste like the men did. Just like the patriarchy has dismissed women’s and gender diverse people’s biological reality for so long. Was the snail’s mucus a metaphor for menstrual blood? Maybe. I’m like that.

Lackington’s: Many medieval quests are inspired by religion, such as the famous Arthurian quest to retrieve the missing Holy Grail. In your story, the knights have an even more ambitious goal: to meet God face-to-face in Heaven. Why did you choose this direct confrontation as their goal?

AJF: I’ve had the understanding of Civil Religion for quite some time, but only came across the term for it recently. The patriarchal military industrialized complex has come to be interwoven with some people’s understanding of patriotism. It’s not “God and Country” anymore, it’s “God IS Country,” a reasoning for violent colonialism and capitalism.

As an atheist, I see God as a creation in the image of man, not the other way round. The ultra-rich and warmongers are attempting to destroy other interpretations of God (hence, violent bigotry against worship of anything other than their deity), so they can replace them with worship of money and power. This is what the knights are trying to do in this story—they think if they can defeat God, they will become more powerful than the church and state.

Sereena realized that the consistent failure of the God missions had something to do with the old adage “The definition of insanity is doing the same thing over and over and expecting different results.” Her attitude when faced with God had to be different, flexible, humble if necessary. Ultimately, it turned out to be a collaboration, something all marginalized populations of the world are attempting to enact to bring us back from the brink of social and climate disaster.

Lackington’s: Is there something about unconventional modes of storytelling that you find especially compelling? Why do we need to make space for stories that don’t always work the way that readers have come to expect?

AJF: As I said before, I like to challenge my readers. I sometimes like to employ a mode Tiptree was brilliant at—creating the world, giving the reader the information, then stepping out of the story to allow the reader to ask themself difficult questions. I’m not here to do Feminism 101, or basic binary stories. I’m here to break things down and take the discussion much further—we’re way past debating the basics. Sometimes that means leaving the reader to wallow in discomfit, sometimes that’s oblique language and structure, sometimes that’s creating a character who’s messy and doesn’t always get the ending they need.

For me, science fiction and fantasy stories are a way to approach real-world issues from the side without the bleakness that often frames realist fiction. That’s not to say SFF can’t be difficult, but it offers hope, solutions, and many futures that realist fiction is constrained from seeking because of the framework of our reality.

Getting down to the bones of it, I’m a sucker for Second Person narratives—there’s so much space there to play with gender. I adore stories that use multiple narrative tenses to situate past, present, and future, and characters in different iterations of their selves—Nicola Griffith’s Slow River and N.K. Jemisin’s Broken Earth series do this brilliantly. I also really like playing with the mouth- or mind-feel of words—unexpected synonyms and adjectives, a twist on the usual sentence structure, and words that can mean one thing and another at the same time to give a different interpretation.

AJ Fitzwater is a meat-suit-wearing dragon perching broodily in Christchurch, New Zealand. Stories from their dragon tongue have appeared in Clarkesworld, Beneath Ceaseless Skies, Shimmer Magazine, Glittership, Andromeda Spaceways, and other venues of repute. They survived the trial-by-wordfire of Clarion 2014. They eat knights for twitter breakfast at @AJFitzwater.