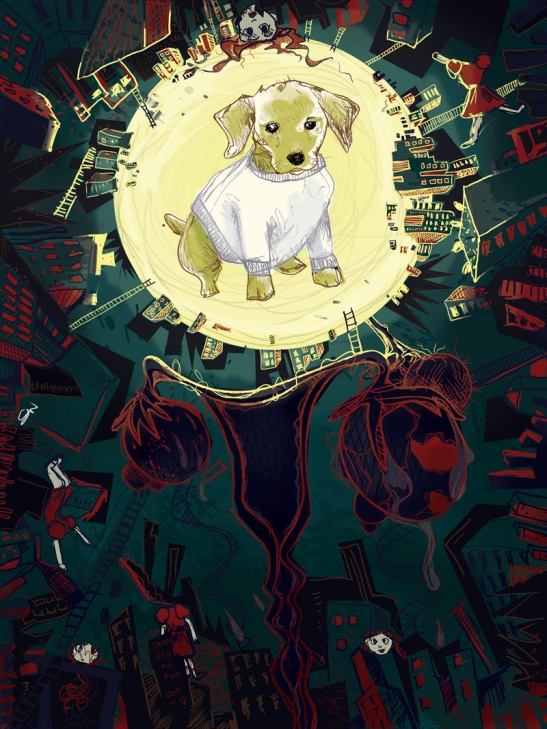 At twenty-two years, Callie’s cysts ate her ovaries, and twisted tubes into malignant spiral staircases. The staircases led to nowhere. They broke apart in places, too dangerous, a looming safety hazard. So we opted for everything removed—wanted it all out, gutted. No hope for remodelling, her reproductive house was haunted, lifeless.

One day in June, with humidity reaching infectious limits, two surgeons cut inside Callie and saw windows smashed, indissoluble dust, antique dolls with heads missing. They used scalpels and antiseptic to tear her walls down. They threw dolls and uterus into formaldehyde dumpsters, pickled some for later analysis. And everything went as expected, perfectly planned. She lost four pounds.

That’s how Virgil came into Callie’s life three years ago. Callie, so hollowed out and vanished for months upon months, saw either Death or the need to Refill. Coming out of the pharmacy one evening, she spotted a tiny photograph of Virgil on a poster: RESCUED PUPPIES, FREE TO A GOOD HOME. She told me his eyes, the deepest brown, seemed just as vacant as she felt. In their loneliness, they needed each other.

Virgil was golden cream, shorthaired. He was soft and playful back then, could fit inside Callie’s hollowness and set her free. And months passed with Callie and Virgil in spring meadows. Lollipop tulips, crocuses budding, Virgil wearing the sweater Callie made him; it was white, light cotton, and under the sun that summer he shone.

I’d find them napping out in the cornfield most afternoons. The crickets and cicadas humming, summer sounds knitting into song around them, and everything dry. The world like fragile hay under his fur, her hair, sprawled out together in sleep. Then autumn came, and the world fell away to barren branches, forests of skeleton trees. In all that darkness, we worried Callie would fall away too. But everywhere Callie went Virgil went. Everywhere Virgil went, Callie followed. There was no breath for Callie without him. There was no love, no thrill, no reason. And while everything around her perished—that winter so cold it tore to the bone—Callie was beginning again.

Soon months turned into years, and Virgil was three years old. Callie made a cake of buttercream frosting, airy vanilla sponge. There were streamers and balloons and tiny birthday-cake sequins. Everyone came. And Callie, in a white eyelet dress, looked just like an angel, something heavenly, magic. She tied Virgil’s navy bowtie delicately around his neck. He sat so still. Snaps of camera shutters, and the two of them captured forever with the fancy birthday hats and confetti. If you look close enough at the photograph, you’ll see something fertile in Callie that day, something swelling. Inside her birds were singing their dawn chorus, Aubade to a Second Chance. And Callie brimmed with cherry blossoms, devotion, breezy afternoons, lush overgrowth of fireweed and forest. Nature will always reclaim what’s lost.

One day, a few weeks after the birthday party, I went with Callie and Virgil to a favourite meadow—it rolled across the southern height of the escarpment, broke at The Peak. We made a picnic of lemon meringue tarts and tuna sandwiches, dog biscuits and carrots, carried it all in a seagrass basket, lay our blanket down. The air was crushingly hot that day. I remember it crept slowly across skin, into pores, boiled over—but they didn’t seem to mind. Just play and love, chasing one another, the sunshine and prairie lilies, flights of dandelion dust.

I watched the day unfold from the blanket, a patchwork quilt of sea greens and turquoise. I read Berryman’s Dream Songs. Lying on my back, I saw the weeping willow’s dancing branches, a mobile above me, heard Callie’s laughter in the distance. Then later, midafternoon, Callie and Virgil playing near the horizon, me nibbling on a tart. I looked down briefly to salvage a drip of lemon cream, looked back up—and it was as though an exhaling swoop, a breeze from heaven. I saw the wind blow straight across the meadow and push Virgil over the peak, a golden flicker. I watched his snout to the clouds, the horizon drop—a split second—and the cliff’s uncompromising edge. Then I watched as Callie jumped after him, so full she could never float back up.

Many thanks to Exile Editions for their kind permission to reproduce this story, which was included in Christine’s remarkable first collection, Auxiliary Skins (2013). —RR

Christine Miscione’s work has appeared in various Canadian publications, such as Exile: The Literary Quarterly, This Magazine, and The Puritan. In 2011, she was the recipient of the Hamilton Arts Award for Best Emerging Writer. In 2012, her story, “Skin Just,” won first place in the Gloria Vanderbilt/Exile Editions CVC Short Fiction Contest (emerging writer category). Her debut short story collection, Auxiliary Skins, was released in 2013. She is currently working on her first novel, which will be published through Mansfield Press in fall 2014.

Stacy Nguyen (artwork) is a graphic/web designer, illustrator, and writer working in Seattle. She is a former news editor and the current editorial consultant for Northwest Asian Weekly, the oldest Pan-Asian weekly still in print on the West Coast. Her illustrations have won awards from the Washington Newspaper Publishers Association and the Society of Professional Journalists. Stacy earned her Bachelor of Arts in Creative Writing from the University of Washington.

This entry was posted on February 13, 2014 by Ranylt in Stories.