The Problem with Thunderstorms, by Dennis Mombauer 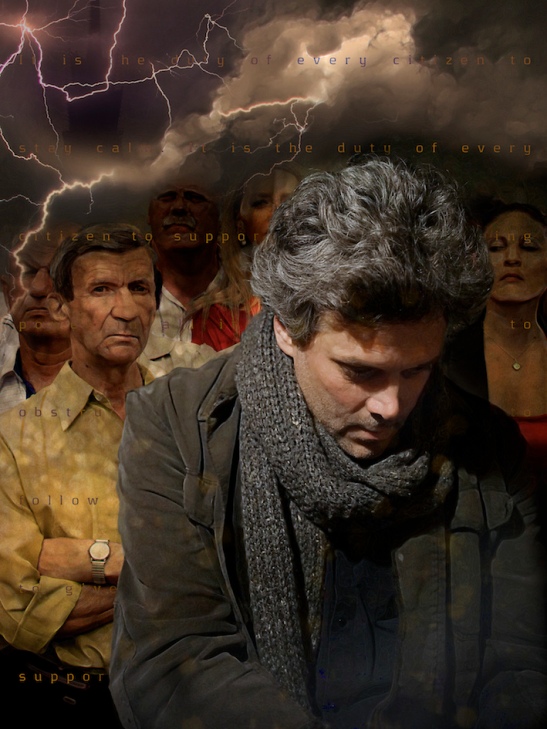 There was thunder in the distance, and a fine veil of concrete dust rained down from the ceiling.

The people who had fled from the storm into the subway cringed, and their murmur replaced the pattering of the small raindrops that wasn’t audible down here. Leros glanced around, looked into unfamiliar eyes that reflected the neon tubes’ frigid brightness, but no recognition.

There was another thunderclap, this time both closer and louder. Leros knew nobody here, none of the other refugees, but he knew that they were all united by their fear of the thunderstorm. Every one of them hoped that it would pass, that the rain and the rumble and the lightning would spare them—but they also knew that the storm didn’t care for their wishes.

Another, much more violent crack of thunder struck down above them, made Leros’s eardrums vibrate and travelled through his entire body, as if he were some kind of organic lightning rod. In the flickering light, the ceiling of the station seemed to arch downward for a brief moment and doused them all with a shower of stone grains and dust, before complete silence set in.

Several wordless heartbeats pounded through Leros, followed by sudden movement breaking out around him. All the people on the platforms began running, men, women and children sprinting along the tracks and into the tunnels, disappearing in the gloom between the distant emergency lights. Leros remained alone in a hall that seemed far bigger now, listened for sounds, and heard nothing. It was as if everyone else had been part of a long-rehearsed theatre play, and only Leros wasn’t prepared when their performance cue was given. He continued to listen, but there was no thunder in the distance anymore, no murmuring of the crowd, and no danger.

Leros wondered if this announcement was meant for him alone or if there were other survivors in other stations, hearing the same thing just now. In any case, it implied that the storm had passed and that they could return to the surface—even though the other refugees had vanished into the tunnels, part of a performance in which Leros’s only participation was as a spectator.

“It is the highest duty of every citizen not to die without good cause or outside the line of duty—whoever dies of old age, illness, his own hand or injuries not sustained in service to the state weakens himself and the cause.”

Leros navigated his way upward along the stopped elevators and unmoving stairways, past glass showcases with posters reminding him to keep calm, no matter the circumstances.

“It is the duty of every citizen not to be overwhelmed, tortured or killed by the enemy; it is equally his duty not to be crucified, burnt or stoned; if someone hangs on the cross, it has to be in service of the cause. A good citizen is a citizen whose eyes are empty and whose hands are full; a good citizen has four fingers on every hand and three nails in every finger. It is the highest duty of every citizen to excavate a hole no less than seven metres deep and four metres across right before his front door, and to fill this hole with glass eyes. His bedroom has to face south, his kitchen northwest, and his weapons workshop toward the Hyades. It is also the highest civic duty to always wear more than five layers of clothing and pants with at least one empty leg; hats are prohibited, unless they are part of a uniform; uniforms betray the cause unless they serve it.”

There were no people anywhere in sight, only empty halls, vacant ticket counters, abandoned bakeries and kiosks. The information boards weren’t defunct, but all they showed was a transcript of the announcement, just like surtitles in a theatre.

Leros stepped outside and left the mechanical voice behind. The sky was clouded, but there were no signs of the storm anymore, no sheet lightning in the distance, no strong gusts of wind, not even puddles on the asphalt.

CROWD (in disorder) There he is! Look! He has come! Quickly, quickly! Does he know it already? Tell him! Tell him! He has won the election!

People stream toward Leros from all directions, a diverse mass that rolls across the pavement, through the untrafficked streets and out of house doors. Their babel of voices is deafening, but gradually softens down as the crowd forms an incomplete semi-circle around Leros and finally comes to rest.

CROWD (in unison) Mr. Taros, we congratulate you. As the only candidate, you have received an overwhelming majority of voices and have been voted the new Director with more than ten percent approval. You are hereby installed in your new office and receive all privileges and competencies that go along with it. Once again: we congratulate you, Mr. Taros.

LEROS My name is Leros… Director of what? What election? What has happened?

CROWD (in unison) In your new function as Director, you have to make tough decisions. We are, as you know all too well, in a crisis—it is storm season. The last thunderstorm has passed, but our metering tells us that there are clouds amassing at the edges of the city. It is possible that a new thunderstorm will break out soon.

Leros senses that the crowd is expecting something from him, some sort of statement or instruction.

LEROS Then… Stay inside your houses, close the windows and install lightning rods everywhere.

A woman, who has up to now just stood there with lowered head like a forgotten manikin, suddenly jolts her chin up and fixates on Leros. Her eyes begin to gleam as if hidden dynamos started to run inside her and power two spotlights, and a quiet buzzing can be heard.

LAMP-EYE (staccato voice) How do you estimate the prospects of success for your perseverance strategy? Do you truly believe that a comprehensive coverage with lightning rods can be achieved? Studies have shown that lightning rods can in some cases cause flash floods—is this a risk our citizens should take? What about raindrops? Isn’t the only viable long-term solution to disperse thunderstorms right at their emergence? Can you guarantee total safety?

LEROS I… Is it possible for us to disperse thunderstorms at their emergence? If so, I am of course in favour of doing so, I just thought—

LAMP-EYE (staccato voice) New research has revealed that thunderstorms are unavoidable natural events. How will you handle this knowledge? Has your plan to disperse thunderstorms at their emergence failed once and for all? Rumours say that you don’t want to do anything against the thunderstorms—care to comment?

The woman’s eyes go out, her head sags forward and she appears to regress back into a lifeless accumulation of human parts.

CROWD (in disorder) Mr. Director! Mr. Director! Everywhere around the city, thunderclouds are piling up! High and far above the open land they form! What shall we do? Mr. Director!

LEROS Can anybody tell me more about the emergence of thunderstorms? Can we disperse them or not? If so, disperse them! If not, build the lightning rods!

A man in a grey coat, its surface covered all over with appliquéd glass platelets, beckons Leros into a side street. His every movement shifts the city reflected in the glass like a kaleidoscope and creates a dizzying effect.

GLASS-COAT Ah, Taros, an honourable pillar of our community if I ever saw one, a well-oiled cog in the gearbox, only in the most positive of senses. Risen up to Director, congratulations, very pretty, very pretty. A short word besides the administration business, yes? Sell your gloves to me, and I will give you paper and plastic I have collected in return, folded into an animal origami if you want, whatever suits you best.

Leros looks at his naked hands and then back to the man. Behind his back, a rising mutter of voices is audible.

LEROS Why is everyone calling me Taros? My name is Leros.

GLASS-COAT Leros, Taros, doesn’t matter, the important thing is that we can come to an agreement somehow, right, hahaha. Buying, selling, pushing wagonloads full of glass eyes back and forth, that keeps a man alive, keeps him fit, awake, ahhh.

LEROS Don’t the thunderstorms have priority right now? I think I should solve this problem first, before I turn to any other business.

GLASS-COAT Ah, but there are always thunderstorms, have always been, will always be, you can’t change that, you can’t act on that, or there will be no progress whatsoever, or you won’t get anything done, and there will be just stagnation.

The crowd on the main street becomes increasingly agitated and noisy, and Leros leaves the man in his glass coat to see what has happened.

CROWD (in unison) The clouds are forming into several big storm fronts that the wind is pushing toward the city. If you don’t act now, the storm will descend upon us. There are no lightning rods, and we are defenceless, at the storm’s mercy.

LEROS But… I told you to build lightning rods! Then go into your houses and carry yourselves to safety! I don’t know what we can do against the thunderstorm, not any more than you do—until now, they have always rolled by.

He searches for the man in the glass coat or the woman with the spotlight eyes, but both seem to have melded into the crowd. The wind freshens noticeably, and from somewhere in the distance, the drumming of the first raindrops on the roofs of the city can be heard.

LEROS Flee into the tunnels and cellars, beneath the earth! I have survived the last thunderstorm there, it is safe. Flee downstairs, and I will think on something to prevent the next thunderstorm.

A crack of thunder splits the sky above them, exactly as loud and violent as the last one that Leros heard in the subway. A few heartbeats pass, then the crowd scatters suddenly, just as it had done in the subway station—and Leros finally understands the problem with thunderstorms.

Dennis Mombauer, born 1984, grew up along the Rhine and today lives and works in Cologne. He writes short stories and novels in German and English and is co-publisher and editor of a German magazine for experimental fiction, Die Novelle – Zeitschrift für Experimentelles. He has recent or upcoming English publications in magazines and anthologies such as Plasma Frequency, Geminid Press’s Night Lights, Nebula Rift, SQ Mag, and Heroic Fantasy Quarterly.