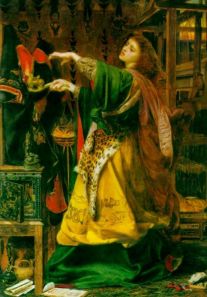 Confession: I’m not the biggest fan of magic. Stage magicians are pure cheese and sorcery-loaded fiction can lack tension. The craftiest magic systems, for all of their internal rules and limitations, can make conflicts easier to resolve and obstacles simpler to hop. The best epic fantasy, for some of us, features very little enchantment—a distant dragon, an uncanny fighter, an undead threat, or a meagre spell that barely lights the air. “But you edit a speculative fiction magazine,” the world sighs at the fickle one. Indeed. One must, at times, read around the thing that doesn’t hold one’s interest, because no story is just for us. That’s part of the compact made between any open reader and an author.

Nevertheless, because Lackington’s is a speculative fiction magazine, a “Magics” issue is overdue. Magic can be found in many of the stories we’ve published in the past, of course, because magic rightly makes its home in the speculative realm. The type of magical elements in those tales, however, are often subtle or slant or allusive—yet for all of that, there are still fictions full of magic in our catalogue that can delight a grump despite herself.

Perhaps Issue 18 strays a bit from its theme, given its prickly editor’s hand. A more generous editor may have sought wizards and wizard schools, blazing wands and bright orbs and all. This editor insists that myth and religion—those original realms of enchantment—are rooted in magic, too, as is the picture we paint of the distant past, so often glazed over with the not-quite-real. Comprehensive magic systems can thrill and impress the reader, but so can magics that answer few questions or glimmer so faintly they’re easy to miss—you’ll find those in here as well.

You’ll also find more than one witch in this collection, as it happens. Why not? They often have something to tell about a world that has misused them, and it’s probably best we listen.

This entry was posted on March 14, 2019 by Ranylt in Commentary.