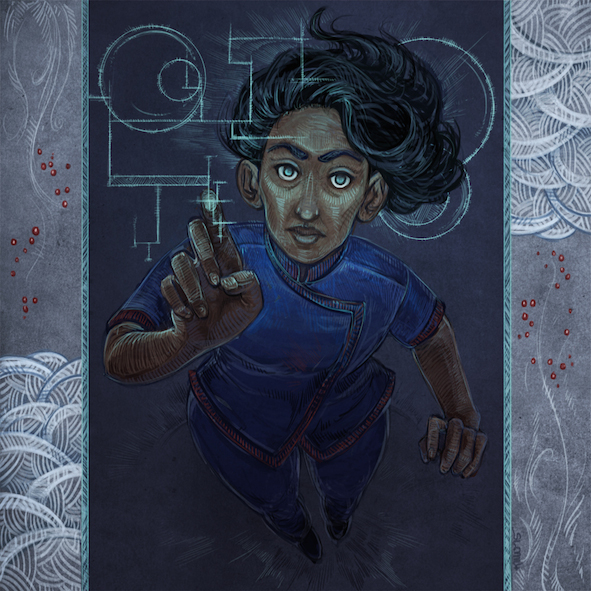 St. Genevieve the Shipwright took her people out into the black with no intention of coming home. Gravity was a poison birthright: the corruption of the Earth entwined in every cell, material hyle infecting both psyche and pneuma. Contemplation and ascetic practice were not enough to perfect a mortal soul, not if she dwelled on the skin of a planet. Each and every one of them had been built by the desires of the demiurge, that lesser creator that sought to trap the divine breath that animated all the universe in shells of substance. By the time she’d reached twenty, Genevieve knew a better way: if she wanted to see the pleroma, the divine regions of light beyond the physical world, she would have to leave all the downpulling Earth behind.

There were many ways off a planet for a quick-witted young woman of grave demeanour, halfway through a theology degree: Genevieve might have become a colonist, or bartered her remaining educational credits for a berth on someone’s merchant vessel. Gone sailing from one world to another, her head shaved in joyous celebration of the necessity of periodic weightlessness, a fixture in every spaceport house-church: a good life and a long one. Genevieve chose otherwise.

She quit her theology program and enrolled instead in aerospace engineering. She would build a new skin for human beings to dwell on. A metal and plastic membrane, precisely articulated, capable of autocephalous survival unbound by any planet: a shipwright’s-world with a hydroponic garden heart, air-scrubbers, hydrogen scoop propulsion. As a theology student she’d read her Origen and her Valentinus, and knew quite well what happened to quick-witted young people who understood the divine through personal gnosis. Neither being anathematized by fellow-believers nor denounced as mad by secularists would let her keep her scholarship—and so she mentioned little of her reasons and less of her goals. Like a desert saint she studied for long hours and kept herself cloistered. She ate only the lightest of foods: soufflés and meringue, pashtida and kuku sabzi, along with an assortment of foamed purées sprayed from high-pressure canisters.

After Genevieve graduated with high honours, the archons of the world came to tempt her. They wore sharp-cut suits and spoke winningly of government-funded exploration programs. They had examined her thesis work and saw its merit and its wide-spanning implications. Genevieve sat at a conference table in a many-windowed room at the top of a skyscraper, the city expanding out below her on every side. She was so far from the ground and yet she felt leaden. Both astrophysics and practical theology told her that she was wrapped in chains: the gravitational force held her very atoms down. The archons in their beautiful suits sat with her, resting their finely manicured hands on the reflecting steel tabletop, and promised Genevieve riches. She refused them. Then they promised also the challenges of devoted service, the pleasures of intellectual companionship, and the satisfaction of renown—her name echoing out beyond a single lifetime. They did not lie. These are amongst the wages the archons of the world can pay. In exchange Genevieve would merely need to remain behind, building ship after ship to send tumbling into the deep black. She would stay tethered to the Earth.

She turned them down. It cost her.

She lost her access to the industrial shipyards and to the university libraries. She no longer had sufficient funds to pay for her cloister room and her canisters of aerated foam. Genevieve packed her few belongings and moved into a shared house in the warren of the city. For years she laboured with the dexterity of her hands and the strength of her back in the shipyards, hired on as a contract mechanic building the shipwright’s-world she had herself designed—though those plans now bore another person’s name. The archons of the world remember those who slight them, and rip them from common memory. Each day Genevieve worked patiently. She installed fail-safes and hidden kill-switches that were in no one’s blueprint. Each microcircuit and line of code that passed through her hands emerged slightly altered, reformed invisibly.

Genevieve attended a small house-church beneath the growing shell of the shipwright’s-world every Wednesday and Sunday and most of the other days besides, and there she spoke sincerely and with great passion about the poison hyle of gravity. When it was her turn to lead the sermon it was clear to anyone present that she was filled up with knowledge of the divine: it was hardly containable in the narrowness of her shoulders, exploded outward in each gesture of her hand, dripped from her mouth in polysyllables. After a time she gathered around her a small group of fellow-travellers who also hoped to seek the pleroma, casting off even the forces that bound the subatomic particles that made them up, both strong and weak.

On the morning the shipwright’s-world was scheduled to launch, Genevieve and her people were stowed aboard, hidden in a ballast chamber. Their weight was accounted for: Genevieve had built that chamber herself and had cheated the numbers. They tore free of the Earth in flame and smoke, as if angelic powers attended their exit. Gravity caught at their bones and clung. They were pressed flat with acceleration. They shouted prayers and invective. At last they began to float. They were borne deep into the black, a subjective month of journeying at sub-light speed while they hovered in the unlit belly of the shipwright’s-world, sipping siphoned water from the hydroponic garden through one of Genevieve’s hidden cut-outs and growing attenuated from gravityless contemplation.

When the shipwright’s-world arrived at its appointed destination, it groaned and stilled. Genevieve’s people clung to the ceilings and the floors, their feet hooked around ladders and outcroppings, their hands extended in prayer towards the centre of their chamber, where Genevieve hovered in front of a terminal. Her hands flew in a brown blur over the keyboard, snatched images and diagrams from the holographic interface above it. They floated in a mandorla around her skull like she was the radiating sun. She tripped every secret kill-switch and took control of the navigation and the life support systems. It was as if she had become a demiurge herself, a lesser creator, with power over everything within her reach. Some of her people called out to her, crying out Ialdobaoth! in terrified warning of how she appeared to have become the lion-headed beast that had made the universe and entrapped the divine within material substance.

When the earthly temptations of the archons of the world have failed, they come with temptations of the spirit: they promise power and victory and achievement. Over the public address system, the shipwright’s-world echoed with Genevieve’s voice as she explained what she had done, and why—how gravity’s poison hyle could in fact be cast off, if human beings were willing to go far enough out into the spaces between the stars. At the same time, her followers swarmed into the rest of the vessel, and some of them went rejoicing.

Once more Genevieve’s voice resounded in every corridor of the shipwright’s-world: in welcome she offered the crew the opportunity to convert and in mercy she offered those who would not the freedom to disembark unharmed in the escape pods and small vehicles. Then she left the safe and corrupted heart of her ballast chamber and went herself out into the corridors, heading for the instrumentation panel and the pilot’s chair. In this way she did not accept the offer of the archons. In this way the glowing mandorla fell from her shoulders and she remained a human woman, seeking dissolution into the pleroma.

Where her people met the crew’s resistance, they were martyred.

Genevieve herself died gutshot across the instrumentation panel. The captain knew what she feared: the commencement of the gravitational field when the shipwright’s-world began to spin. His hands were on the controls when she arrived, and she tore them free: she threw herself down across the instruments and shielded them with the fragility of her flesh, clinging hand and foot. She refused to move, even if it meant her death. No human captain would overmaster her, she who had contended with the preternatural powers of this lowest world. The crew filled her up with bullets and her blood rose from her in a cloud of perfectly spherical droplets. Those amongst her people who witnessed her dying reported that each droplet was like fire, burning the flesh of the crew who stood in opposition and sparing those who believed.

This was the first miracle of the saint. Many others have followed. Three relics of St. Genevieve are preserved in the shipwright’s-world: a fingerbone, a vial of blood, and the saint’s own book of notes, an autograph, which contains both sketched blueprints and commonplace prayers. Pilgrims who visit the shipwright’s-world must be prepared to forego the comforts of poison gravitation, but may note that the relics do not decay.

Translator’s note: We must consider the various Vitae of St. Genevieve the Shipwright apocryphal, as there is no independent corroboration of a stolen worldship that can be dated to as early as the 23rd century. The “Contra Gravitatem” suggests, however, that at one point an independent worldship served as an active pilgrimage site, and there may yet be untranslated records of such a vessel arriving at ports more distant than Vega Seven.

If you enjoyed this story, you can let us know by subscribing, becoming a Patron, buying single issues, or donating. Click here to learn more.

Arkady Martine is a speculative fiction writer and, as Dr. AnnaLinden Weller, a Byzantine historian. In both capacities she writes about border politics, rhetorical propaganda, and liminal spaces. She was a student at Viable Paradise XVII. Arkady grew up in New York City and currently lives in Uppsala, Sweden.

Kat Weaver is an illustrator and writer whose work has previously been published in Apex Magazine and The Toast. She lives in Minneapolis with her girlfriend and two birds.